The park was a gift to the town from the Bathurst family in 1892 to mark the 25th birthday of Charles Bathurst. It was opened with due pomp and ceremony on 21 September of that year, when some 15 acres of land were presented to the people of Lydney and Aylburton. The Parish Council was appointed as the sole Trustee of the Park in 1898 and the Town Council continues to manage it as a separate Charitable Trust.

A recent addition to the park is the Garden of Remembrance which was donated by the Royal British Legion and a rose alley symbolises those killed in the two world wars. The gates to the park were erected in 1953 to commemorate the Queen’s coronation and were declared open by Viscount Bledisloe.

The Park continues to be the pride of Lydney and annually hosts a magnificent fireworks display each year, plus other social events throughout the year.

The park is open daily from dawn to dusk and provides the perfect spot to relax!

On 3 April 1946, the first Viscount Bledisloe and his friend John Watts jointly gave 29 acres, including an area of marsh land, to form Lydney Recreation Trust. The chief aim of the Trust was to provide playing fields for the healthful recreation of the public of Lydney. A sum of money was also invested in order to support the future financial prospects of the Trust.

In 1949 the Cricket Club and the Football Club started to play on the land and in 1950 the Trust increased its acreage from 29 to 45 acres. 1950 also saw the diversion of part of the River Lyd and over the following three years a particularly marshy section of land was turned into a boating lake. Six tennis courts (four hard, two grass) were also created and other parts of the Trust’s land were improved. However, the land continued to flood and in 1954 a drainage scheme and comprehensive pumping equipment were installed at the recreation ground, in order to provide a solution to the flooding problem.

A grounds man’s house was built in 1958, together with a tennis pavilion in 1960 and over the next few years improvements to the ground continued. New entrance roads were constructed, together with 18 new garages, and the Trust looked set for the future. In 1964 Viscount Bledisloe gave a further six acres of land to the Trust which increased its acreage to 51 acres.

Lydney Parish Council was appointed sole Trustee of Lydney Recreation Trust in 1968 and Lydney Town Council continues to operate the Trust as a Charitable Trust. Today the recreation ground provides facilities for rugby, football, cricket and fishing and also a skateboard park. So, what of the future?

The Trust faced a momentous challenge to replace the original drainage system and this work was finally completed in 2020. 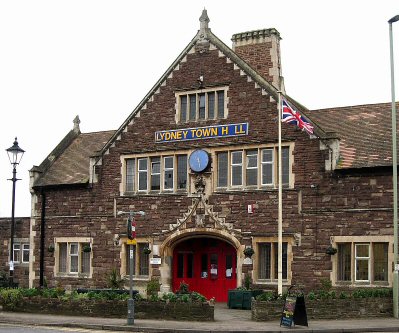 Lydney Town Hall was built as a result of an idea by a group of public spirited local people who contributed to form the Lydney Town Hall Company. The land was donated by Charles Bathurst, Senior, and on 15th December 1888 the building’s foundation stone was laid by Charles Bathurst, Junior. Building was finally completed in September the following year, and the building was officially opened by Miss Mary Bathurst, the latter’s elder sister.

The Town Hall was much used by the local community, indeed the Directors of the Lydney Town Hall Company granted free use of the Town Hall as a hospital to the Red Cross Society from 28 October 1914 to 28 February 1919. During the second world war the hall was requisitioned by Gloucestershire County Council in connection with Air Raid Precautions and Home Defence.

The Parish Council was handed the Deeds of the Town Hall in 1968, and the Town Council was appointed the Sole Trustee of the Lydney Town Hall Trust in 1993, which continues to operate as a separate Charitable Trust.

The Town Hall continues to play a vital part in the town’s community and offers a large stage with dressing rooms and lighting facilities, in addition to office space. It is an ideal venue for theatrical productions, wedding receptions and private parties, as well as public exhibitions (the Beatles even played there!).

In May 2012 the day to day management of the Town Hall was taken on by a separate Management Committee, however, the Town Council retains custodial Trusteeship of the facility. Visit Lydney Town Hall for further information on the halls future management.